Further to my earlier articles in t 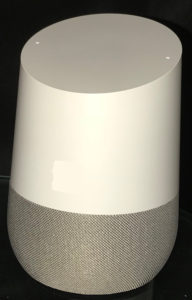 his series about integrating Google Home with Home Assistant I have made a few changes to my configuration.

You might remember that I used the all-in-one setup of Home Assistant for Raspberry Pi. There are (were) 3 different ways of setting up Home Assistant on a Raspberry Pi – the all-in-one method as it turns out was probably the original way and wouldn’t you know it, the month after I set it all up it was ‘depreciated’ and no longer supported for new installations although existing installations can continue to update this installation. There is also a Hassbian installation which is essentially a standard Raspbian (the usual RPi operating system) with Home assistant integrated. This has an advantage of allowing all other functions of linux on the RPi.

The third method is by installing a custom operating system called Hassio. This has a disadvantage of being fairly locked down, cannot install other things on the Pi etc. As I really wanted a dedicated Pi anyway running Home Assistant and thinking that in the long run it was probably the best option I installed Hassio. It was an easy installation and with some addons I was able to get limited shell access, Samba access (so I can configure the YAML files in Windows) I was up and running with very little fuss. I did buy a new Raspberry Pi 3b for this as it’s faster and more future proof (ha!)

Once it was installed, I just copied all my old YAML files into the /config folder and rebooted the Pi. Then I was up and running just like I had never changed. One of the disadvantages is that updates for Hassio tend to roll out delayed compared to the all-in-one and Hassbian variants. I’m not regretting switching.

With version 0.58.1 of Home Assistant, the refresh service for Google Assistant has been implemented. This means that instead of having to unlink the ‘App’ in Google Assistant every time you want to make an addition or change to your devices, you can simply refresh the app and all the changes will be there which means that you don’t have to continually reset the rooms etc as you did before. Really you need to just follow the instructions provided by Home Assistant to set all this up as this is not a step-by-step at all.

I find that using this integration with Google Home is superior and longer term will have other benefits and I now no longer need to use IFTTT to control the lights. Cool!