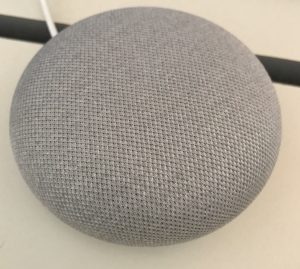 So I just got another Google Home – but this one is a Google Home Mini. I got this one for my office so I can listen to background music easily without blasting music everywhere at home.

I’m also planning on getting a mini for our bedroom to listen to music with the new sleep timer that was recently introduced.

I asked about this on the Home Assistant support forum and got a reply:

‘A couple benefits of “native” integration with HomeAssistant, Google Assistant will know the state of your devices and you can group them into rooms within the Google Assistant app. The response time seems to be about the same as IFTTT – maybe ever so slightly faster.’

In reality, having now done the integration, I have no more control than I did before and a few annoyances that I’ll explain.

Just further to that, one benefit of this integration over using IFTTT is the ‘fuzzy logic’ IFTTT is rigid – you give it 3 ways to say something and if you don’t follow that exactly then IFTTT does not understand and won’t trigger the action. If you use the integration it’s a little smarter. WIN!

Setting it all up.

The instructions supplied are very good and I won’t repeat them here. Just a couple of notes/traps.

From that point it was pretty clear sailing except for one thing. I have a Belkin Wemo switch already in my home assistant and Google Home has native support for this device already. This meant as I followed the instructions to the letter, I had additionally exposed the switch domain to the google assistant integration. This meant I had the switch ‘double configured’ and could not control it because Google Home did not know which switch or which coffee maker I was talking about. I did fix this by renaming the nickname in Google Assistant to another name, however if I continue to use the old name it plays dumb and says it does not know which coffee maker I am talking about. I will most probably remove the switch from the exposed domain list however if I get another switch at some point…….. I could also unlink the wemo from Google as that would give me one unique coffee maker.

I did remove the specific switch from the Google Integration and it’s worth spelling out how I did it. I also added some scenes for further light control. It is possible to add the ‘scene’ domain to be exposed by Home Assistant.

To remove the specific switch, I used the customize.yaml file shown below. Customize.yaml was automatically created (with 0 bytes) when I setup Home Assistant and the include command was already added to configuration.yaml (see earlier posts for information on this)

Next thing was to add the scene domain to configuration.yaml:

The only other thing is to show the scenes I added. These are in a file called scene.yaml:

Note the color_temp and kelvin settings are commented out as I am having a lot of trouble with the Lounge Room lights for some inexplicable reason being locked to ‘blue’ when they are switched on by Home Assistant and those settings are invalid when the light is in RGB rather than white mode. If I activate the exact same scene a second time they change to white mode again. I can’t tell you how damn annoying this is and I just can’t seem to solve it (yet!) This all started when I started playing with the movie mode. (Removing the temperature setting seems to have fixed this)

If/When you add these to Home Assistant, you have to unlink the (You go into the Google Assistant App>Settings>Home Control, click on … in top right corner > Manage Accounts, tap on the linked ‘app’ in my case it’s called [test] Home DEW and you can then unlink it. Then re-link it from the Add new list. I’m sure this is fluent gibberish but when you use the app it’s reasonable clear if you have these pointers.

When you re-link the app, you will need to configure the rooms again etc. Also remember when you have added the scene.yaml, edited customize.yaml and configuration.yaml that you need to either reboot the Pi or restart Home Assistant before you can re-link the app and use the new settings.